Some people are calculated.  They think it over (and over and over) and move slow to the point that sometimes the moment is gone before they act.  Other people so don’t want to miss the moment that they just hit the gas pedal first and hopefully find the steering wheel before they need to turn.  You know which one you are.  You are either telling (or cringing and whispering inside your head)  people to slow down and think about it or wishing (maybe yelling inside your head) people would just hurry up already.

I saw a video early this morning of Bailey Matthews.  In the video, Bailey, an 8 year old with Cerebral Palsey, is finishing a triathlon and he bravely let’s go of his walker to run unassisted to the finish line. Someone with his condition would have trouble walking let alone running or finishing a triathlon so every fifteen feet he would fall down, but you can imagine someone with that kind of heart would not quit and he didn’t.

I was wrecked.  So many emotions and inspiration in a just a moment. . ..falling down, fearless, triumph, faith, resilience, inspiration, courage, bravery.

A few minutes after watching Bailey (video below),  I asked God to tell Peter that I was sorry for me.

Peter. . ….he was one of the 12 disciples who hung with Jesus for three years and then after Jesus left earth, took the good news of all that took place far and wide.

It may sound crazy to you, through embarrassment and tears as if they were in front of me, that I apologized to someone who left this earth almost two thousand years ago but here is the deal.

Many times I judged Peter for being proud and an “act first think second” guy.  I have spoken before about Peter’s pride and over self-confidence that caused him to trip up.

Granted, Peter had his moments.  He was loud, not afraid to speak up and speak out. When Jesus said He was going to be killed and later raised from the dead, Peter took Him aside and tried to correct Him (not a great idea to correct God).  Some people see it as a blunder in Matthew 14 when Peter sunk into the sea after stepping on the water and taking his eyes off of Jesus (we will come back to that later).  When Roman soldiers came to arrest Jesus in John 18, Peter drew his sword and sliced off one of their ears (which Jesus fixed before He was arrested).  When Jesus said He would be deserted by His friends, Peter says even if everyone else deserted Him that he would go to prison and even death and yet a few hours later deserted and denied that he even knew Jesus (even though he was one of His best friends).

I judged Peter many times.  Peter and I are similar at the core but our timetable is a bit different.  To a fault, I can sometimes be a think-first-to-the-point-of-no-action guy.

Peter was a fast mover.  He couldn’t wait.  When he saw something he wanted, he went after it.  His passion and childlike wonder demanded that he get there fast.  Whatever was the affection of his heart,  he wanted to be close to it immediately and seperation and waiting were not ok with him.  He was always so anxious to believe and act that when he saw Jesus walking on the water in Matthew 14, chains could not have held him in the boat after Jesus said “come”.   Others saw a ghost and life threatening waves but not Peter.  There was only one man Peter knew that could walk on water and he was going to meet him on the water instead of waiting the extra two minutes until Jesus caught up.  People like to focus on the fact that Peter took his eyes and confidence off of Jesus and he sunk, but there isn’t anyone else that can say they walked on water.  Would you rather tell your grandkids, “From the safety of the boat with the life preserver around my neck, I watched the silly Peter get out and sink” or would you rather tell them, “For a few moments, I walked on water”?

Some time later, after Jesus death, his friends were together and mourning.  In Luke 24 when the news came to them that Jesus’ tomb was empty, it says the rest of them just sat in disbelief because it sounded ridiculous to them.  Not Peter.  Do you think Peter took a slow contemplative walk to go see for himself?  No chance.  Peter ran all the way there to see for himself.  And, I love one of the last times we hear about Peter interacting with Jesus in John 21.  This was after the resurrection and Peter and the disciples were fishing (a few of them were commercial fishermen by trade).  After a long night of empty nets, a man on shore shouts out to them to cast their nets on the other side of the boat and they will catch fish (a ridiculous assertion but was almost identical to their first encounter with Jesus in Luke 5).  As soon as they did so, they had a huge catch of fish and it was obvious to them that the man on the shore was Jesus.  What does Peter do?  He instantly jumps out of the boat and leaves them to haul the catch and row to shore.

Peter loved furious.  His faith and passion moved him quickly.  The video below reminded me of Peter and helped me see him in a little different angle.  Bailey has heart.  His passion for the prize caused him to let go of the security of the support and run for what he loved even if it meant falling.  I need more of that.  A critical faithless eye standing near the finish line that didn’t see the race might just see failure and two falls in a short distance.  God sees heart.  God sees faith.  The prize is worth the risk of a fall.  I’ll tell you again when I meet you one day, but “I’m sorry, Peter.”

This is another one too good to not share. 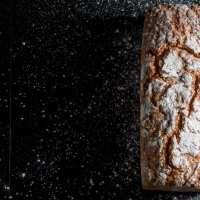 Harvest memories & Rein-Deere
That time I rode through the aspens in the fall with my love #25years #travel #love
Always True
Grand Teton National Park - Cascade Canyon: one of my all time favorite views! 💯🤯🙌🏼
I recently returned from a mission trip to Ireland (August 2022). A number of people have asked how the trip was for me and how it went. My simple answer is; "life changing."