Are you a controlling person?

Most of us would answer with a pretty confident ‘no’. However, the truth is we all have things we do for some measure of control.

For example, how much distance do we put between us and others? How do we respond with our words, actions or body language? Do we deflect back to the other person when confronted, use guilt trips, blame and finger pointing, etc?

Even people that are more blatantly controlling with their words or actions often have a goal of connection but fear drives them to seek security in control.

When security is found in being in control we use controlling language or behaviors for connection but it never has positive long-term results.

Where spirit of the lord is freedom. 2 Corinthians 3:17

Control is always a byproduct of fear. Controlling people sometimes seem like strong personalities, unafraid to be assertive or strong willed. But, what looks strong is just an aggressive attempt to alleviate fear down deep. Controlling people usually have painful experiences in the past where they experienced some form of loss or controlling environment in the place of real connection.

Freedom is attractive and true love only exists in the presence of true freedom.

When we set people free to choose or reject us, we give them the ability to choose love and connection instead of being forced into it. When people are being controlled through aggressive (anger, rage, abusive words, overly emotional behaviors and outbursts, violence, manipulation) or passive behaviors (silent treatments, guilt trips, blame, etc) their hearts will begin to move away from the relationship even if they are still physically present.

Sometimes control isn’t motivated for a sense of connection, it is used for self-protection. There are times healthy boundaries are put in place for the sake of allowing the relationship potential to grow in the future, but that isn’t what I’m referring to here. When we don’t choose to be vulnerable and communicate honestly about our hearts, we may use more passive behaviors for self-protection but that is still a form of control and leads to disconnection as well.

So, we have to choose what we value more and where our security will be. Connection or control?

Connection often takes longer. We have to be vulnerable and invite people to connection and then give them the freedom to choose to move toward us on their own timeframe. Control wants to force connection before a heart is ready or before trust is established in the relationship.

Giving people freedom doesn’t mean be passive. Communicate, be vulnerable and tell people what you want or hope for and then leave it in their court to respond.

Pursuing connection is risky because we relinquish control but it has much better long term results. By demonstrating that we want relationship and connection without strings attached, we prove we are trustworthy of something real and lasting.

So which do you want?

You can have connection or control. But, you can’t have both.

Let’s talk about it! 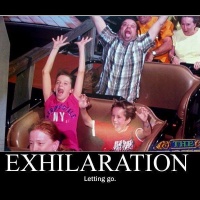